Skip to Main Skip to Footer

Is The Stock Market 'Bubble' About to Burst? — BULL!

Someone can only think we are in a market bubble if they have never experienced one.

A bubble is a broad stock market mania that effectively seizes the popular imagination of the whole country. During these manias, stocks are all anyone talks about and everyone is “in the market.” And, of course, these investors are making much more money than you are. Doctors and lawyers abandon their practices to become “professional” day traders and blue collar workers take out home equity loans to buy stocks on margin. Checking account balances disappear and bond funds and bond ETFs go into massive net liquidation while US equity mutual funds and ETF money inflows soar to unprecedented levels. The stock market consumes both the entirety of the country’s available funds and the entire culture.

There are only three times in the last 100 years where this has happened: 1929, 1968 and, most recently, in 2000. There may be, during a long market advance — and today there currently are — any number of isolated fads reminiscent of what went on in previous bubbles: pockets of visible speculation in the form of SPACs, Bitcoin, Robinhood/Reddit traders, electric vehicles and Unicorn IPOs, to name a few. But those conditions don’t come close to constituting a market bubble.

Today our banking system enjoys near-record levels of reserves (bank excess reserves on the morning Lehman Bros. went bankrupt were virtually zero) and the consumer’s balance sheet is more solid than it has been in 40 years, if not ever. According to Barron’s, US household wealth last year rose to $130 trillion, a new all-time high. Consumer debt as a percentage of disposable income is near record lows. Most importantly, investors withdrew cash from US equity mutual funds and ETFs at a record level of $211 billion in 2020.

Moreover, the previous cash outflow record of negative $167 billion was set in 2019 — the second highest returning year in the best bull market in history. Since 2009, investors have sold out of domestic stock funds and ETFs to the tune of over $550 billion. By contrast, in the “bubble-decade” ending in 2000, fund flows into US equity mutual funds and index funds totaled over $1 trillion, with a record-high annual inflow of $150 billion in 2000 when the bubble burst. All bubble markets are characterized by having record inflows into them in the latter years, not record outflows!

We Remain in the Midst of the Longest & Strongest Secular Bull Market in History!

How Can I Invest with Stocks at Record Highs?

All investors are generally wary of the timing of any “new” market investments simply because we are always afraid of relying on an intangible to provide us with financial security. This feeling of insecurity is enhanced when we focus on certain current events like politics, talk of fresh market highs and a “bubble.”

First and foremost, the market’s level or perceived valuation is never a consistent timing tool. Second, as Jack Bogle, founder of Vanguard and the inventor of the index fund once stated, “I have never met anyone who could successfully time the markets, nor have I met anyone who has ever met anyone who could do it!” Finally, one of the surest ways to fail to meet long term wealth objectives is to engage in the greatest of all investment fool’s errands – attempting to gain a timing advantage over the market.

Since about the mid-1990s, a company called Dalbar has been publishing annually its study of the effects of poor investor behavior on the investors’ actual returns. They have consistently found that over 20 year periods, the average investor actually underperforms the S & P 500 index by some 40%. After two decades of this consistent finding, the CEO of Dalbar wrote an impassioned cover letter to go with the 2014 study. It was like a cry from the heart. What he said was: “despite all the left-brain data, information and advice that have become limitlessly available to investors in this internet age, their behavior has not changed!” His conclusion: investor education does not work.

Fusion could not agree more as one of our core tenets is that wealth management success or failure is attributable to one part intellect (what we or the client knows) and 99 parts temperament (what we or the client actually does). Unfortunately, the financial-advice industry and the financial media supporting it actually believe it is the other way around, which is a key cause of investor failure. No matter how smart one was or how much they knew about finance, if they abandoned all else in the late 90s to chase every dotcom, telecom and internet stock, their wealth and their retirements were damaged irreparably.

That’s also the case for those who panicked and sold out of their stocks in in 2008 or March of 2020 or any time in modern history.

Since our bodies cannot store vitamin C, we must constantly replenish it with a new vitamin each day. Human nature will continue to attempt to destroy one’s investment plan time and time again through all the fads and fears of an investor’s lifetime. Because of the immutability of human nature, the most important function of any effective long-term financial advisor’s role is to provide continuous behavioral investment counseling (BIC) to prevent human nature from its destructive tendencies. In effect, Fusion’s most important role to our investors last year was – and always is — to be their vitamin C.
The first year of the decade I was born in (1960) saw the S&P 500 at 60. Today it is over 4,000. A million dollar investment has grown to just under $70 million. In 1960, the cash dividends being generated on the initial $1 million was $35,000 per year. Today, the dividends, having grown by about 6% annually – twice inflation — now pay about $1 million. It would cost about $200,000 today to buy what $35,000 bought then. So stocks enabled one not just to keep pace with relentlessly rising prices, but to increase one’s standard of living by a factor of 5X. In sum, over these 60 years, marked by many crises, wars, runaway inflation in the 70s, US government shutdowns, inflation is up about 9X, stock values are up about 70x and cash dividends are up 30x.
Page | 4 Jonathan R. Blau – Fusion Family Wealth 4.7.2021
The miracle of diversified equities as historically the most reliable and predictable long term wealth preservation solution continues on! Yet many continue to fear and mistrust it and in a perverse way, I guess there is a part of me that must celebrate that fact.
“More money has been lost by investors preparing for corrections, or trying to anticipate corrections, than has been lost in corrections themselves.” — Peter Lynch

Debunking the Myth of the Addage "Buy the Dips" 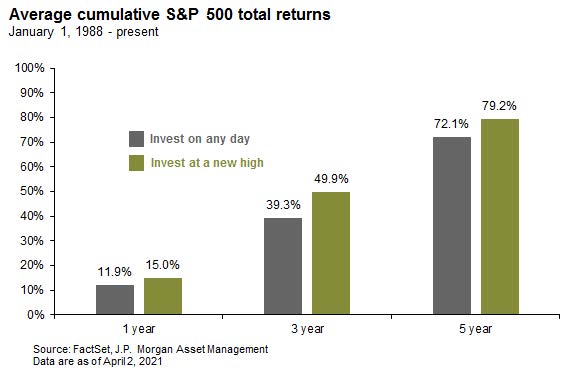 Wishing all a very happy spring and looking forward to seeing everyone in-person in 2021!